Protect your investment in OpenGL ES on iOS and macOS!

Has Apple’s announcement of their plan to deprecate Open GL and OpenGL ES left you wondering how to take your OpenGL ES product into the future? — Your future is here!

MoltenGL provides the power to transform your graphics applications and games on iOS and macOS platforms. This premier product from the developers of MoltenVK will run your OpenGL ES 2.0 application or game on iOS or macOS using Metal — and faster!

No need to rewrite rendering logic and shaders for different platforms or abandon the familiar OpenGL ES 2.0 API. Applications built for OpenGL ES 2.0 can use MoltenGL to run on top of Metal, to gain the additional graphic performance of Metal today, and to protect your investments in OpenGL ES into the future!

What MoltenGL can do for your product…

MoltenGL is an implementation of the OpenGL ES 2.0 API that runs on Apple's Metal graphics framework. MoltenGL provides many of the performance benefits of the Metal framework, while maintaining compliance with the proven OpenGL ES 2.0 API. And MoltenGL will continue to run your OpenGL ES application or game on future versions of iOS and macOS, should Apple remove OpenGL ES in the future.

Draw at up to 3x the Frame-Rate!

Want to render your content faster? MoltenGL's use of Metal's low-latency rendering provides up to 3x the frame-rate to keep the action in your OpenGL ES 2.0 game or application smooth and fluid, all without changing they way you use OpenGL ES 2.0. 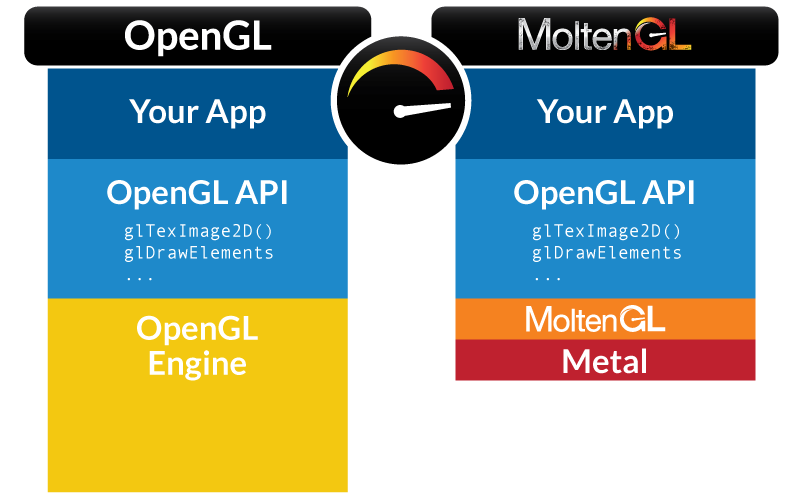 Continue to use the familiar, industry-standard OpenGL ES 2.0 API on all your platforms.

With MoltenGL, you can continue to use the familiar, industry-standard OpenGL ES 2.0 API to build games and applications that run unchanged on multiple devices, platforms, and operating systems, including those that support Metal.

MoltenGL automatically detects whether the device running your game or app supports Metal, and will use the Metal framework where available. When running on a device that does not support Metal, MoltenGL will automatically downshift, and transparently make use of the native OpenGL ES 2.0 rendering engine. You can continue to use a single OpenGL ES API to build across multiple devices, platforms and operating systems.

Benefit from the Metal development ecosystem.

Metal is the future of high-performance graphics on iOS and OS X, but it isn't portable. With MoltenGL, as Apple and others continue to add sophisticated developer tool support for Metal (such as advanced performance-tuning tools like Metal System Trace), you can benefit from these steady improvements to the Metal development ecosystem, while maintaining platform portability through the industry-standard OpenGL ES API.

With MoltenGL, now you have available a wickedly-fast implementation of OpenGL ES 2.0 that runs on OS X. Now you can seamlessly port your iOS games and applications to OS X, without having to rewrite and support them in desktop OpenGL. And on both platforms, your OpenGL ES application will benefit from the speed and additional debugging and performance tuning capabilities of Metal.

And don't forget WebGL. With OpenGL ES now running fast on iOS and OS X through MoltenGL, new opportunities open up for taking WebGL to another level of performance and capabilities, through browsers and other tools that use MoltenGL. 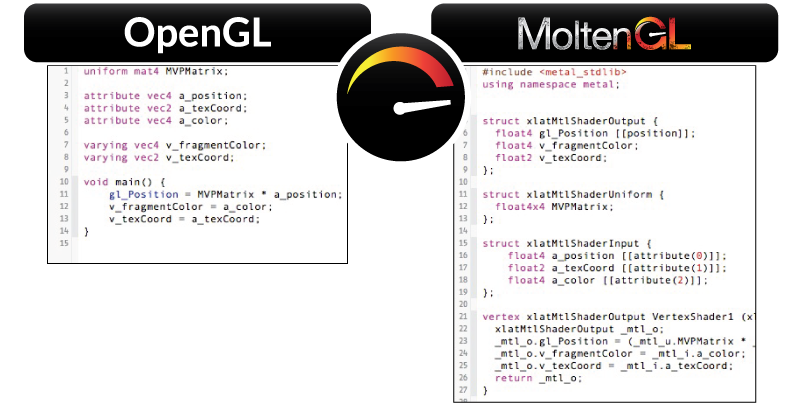 Avoid the effort of rewriting your OpenGL GLSL shaders to run on Metal devices, and avoid the ongoing headache of maintaining two separate collections of shaders.

Metal uses a different shading language, the Metal Shading Language (MSL), than OpenGL ES 2.0, which uses the familiar OpenGL Shading Language (GLSL). MoltenGL will automatically convert your GLSL shaders to their MSL equivalents. This can be done transparently at run time, using the Runtime Shader Conversion feature of MoltenGL, or at development time using the offline MoltenGLShaderConverter development tool, provided with MoltenGL.